From – 1978 to 1979 – students from the Davis Student Cooperative worked with Village Homes architects Mike and Judy Corbett to build the Sunwise Cooperative. Founders Jennifer Fipps, David Sausjord, Glenn Schoenfeld, David Smart, Susan Beth Steckler, Barbara Wezelman, Jon Weinstein created the non-profit Solar Community Housing Association to own and manage the property, under the direction of a board made up of residents and community allies.

In – 1986 – the Davis Art Center moved from its location on 234 J Street to the NE corner of Community Park, and the City donated the old J Street property to SCHA.  Taking out a loan/mortgage on Sunwise, SCHA remodeled the building to create a total of seven bedrooms and replace the roof through volunteer efforts, creating the J Street Co-op.

In – 1992 – SCHA began to move and renovate several buildings to a lot in east Davis to create a “homestead” of houses.  The houses featured a variety of experimental green building measures, from recycled materials to roof ponds, designed to serve single parent families.  The properties were originally occupied in 1996.

By – 2006 – it had become clear that the demands of Homestead’s (not very functional) experimental/green design, the time required for Federal funding paperwork (of a then all-volunteer org), alignment with the needs of single-parents, and other challenges were too much for SCHA to manage. The property was sold to the Community Housing Opportunities Corporation and Yolo Community Care Continuum to better serve the community.

In the spring of – 2009 – the City of Davis issued a Request for Proposals (RFP) to move two 1930’s houses from downtown Davis to create low-income housing on two vacant lots in Old East Davis, directly across the street from SCHA’s J St. Co-op. SCHA proposed a low-income cooperative, and was awarded the project on July 28th, 2009. The support of Old East Davis neighbors, local organizations and community leaders, and SCHA alumni was instrumental to the award. Following renovation of the two houses in 2010, cooperators moved in and established Cornucopia Corner Co-op (now known as “Corner”).

In – 2011 – SCHA was approached by residents of the Baggins End Sustainable Living and Learning Community (‘The Domes’) on the University of California, Davis campus, who were at risk of losing their leases. The Domes, built in 1972, were the first student-built campus co-housing in the country. Remaining loyal to SCHA’s roots in the cooperative communities on campus, SCHA partnered with Domes residents, alumni, and the University. SCHA ground-leased the Domes property and offered leases starting in 2012 to help maintain it as sustainable, cooperative housing at UCD for years to come. 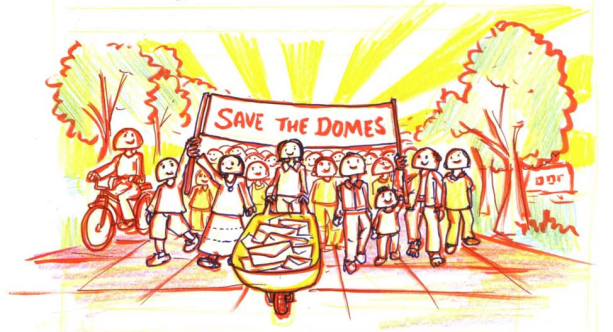 In – 2015 – SCHA, following a successful partnership managing the Domes, SCHA was approached again – this time by UC Davis – about managing the UC Davis Tri Co-operative. This led to SCHA’s largest ‘co-expansion’ to date, joining with the members of the Tris’ Davis Student, Pierce, and Agrarian Effort co-ops and growing SCHA’s total membership to ~90 co-operators. It also brings an important aspect of SCHA’s history full-circle, as it was students of Davis Student Co-op in the 1970’s who raised the original funds to build Sunwise Co-op and found the Solar Community Housing Association!

In – 2019 – SCHA, finalized a 15-year ground lease for the Domes, securing the Domes, along with the Tri Co-ops, through 2035. We are currently renovating the Domes and we’re looking forward to the Domes’ 50TH BIRTHDAY!!

We envision a future where we continue to expand and provide lower-cost cooperative housing to more and more Davis residents.